Yes, you read that correctly. Since publishing our last post in July 2016, we have sailed precisely 47NM along the Costa del Sol to Almerimar in Almería Province.

We acknowledge that the situation is ridiculous – to the point of having procrastinated (and repeatedly postponed) the publishing of this post, due – quite frankly – to shame.

So, with that uncomfortable admission out of the way, we’ll press on, shall we?

Why are we still here?!

Primarily, Hugo’s birth certificate. Or lack of it. We arrived here in July 2016 and, despite being 7 months old by that point, he still did not have even a single piece of documentation stating his identity and parentage.

Obviously, this was also an issue for entering new ports, and necessitated a graduating scale of falsehoods, from economy of truth to outright and blatant lies (“We need to see the passports for everyone on board. OK, just the two of you, a cat and a dog? Very well.” – as we prayed that Hugo [hidden in the v-berth] didn’t give us away by crying…). It was also an issue for getting his passport so that we could leave Spain. The issue started long ago – back in Málaga at the hospital in fact – but the administrative process to get the certificate issued started in La Linea. After months of trying to get the required documents, letters, statements, certificates etc – and then of course the necessary translations – our application and documentation was finally taken by the office – and then sent to another office (where it would be processed if the application was successful). We then heard nothing for several more months, despite several trips back to La Linea and Málaga, and the process seemed to come to a halt – nobody in La Linea knew what was going on as all the documents were in Málaga at the other office, and nobody in Málaga would speak to us. At this point we decided to employ a Gestoria. These are essentially ‘red tape agents’ who sort out your governmental administrative issues and paperwork. Gestorias are prolific in Spain, which should give you some idea as to what a complete nightmare it is trying to get anything sorted out here. Unfortunately, the Gestoria turned out to be near-useless and – to cut a long story (not that) short – we enlisted the help of a lady called Chris who had been recommended to us by the manager of one of the local bars. Chris was our (female) knight in shining armour – knowledgeable, tenacious, and – as a resident for over 30 years – fluent in Spanish and all the idiosyncrasies of Spanish life, bureaucracy and ‘getting things done’. Within a month of meeting her, the birth certificate had arrived! We were amazed – both that it was finally sorted, and that the Gestoria had been so utterly inefficient in carrying out the function that they basically exist to provide. 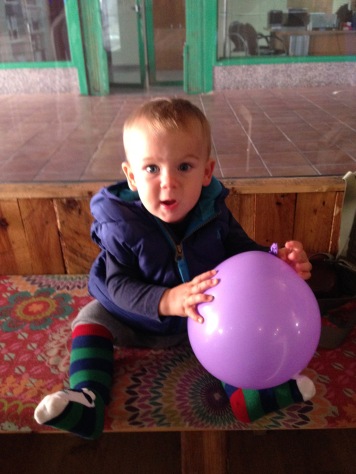 They swapped me the paper for a balloon. Fair enough.

They are happy. I’m confused.

So, just before Christmas 2016 (and shortly before Hugo’s 1st birthday…) we finally held the birth certificate in our hands! This prompted a big celebration involving beer with Mexican and Chinese food for Jamie and I, and balloons and stewed apple for Hugo (put like that it sounds like he got a bit of a raw deal, but he *did* get a birth certificate….)!

Reaching for that lovely bright warm thing on the cake… 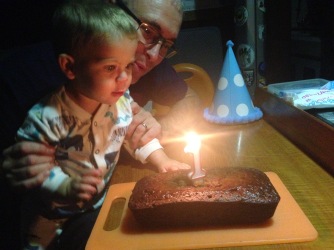 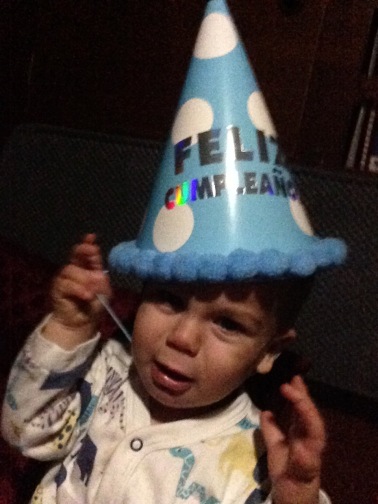 Then it was ‘just’ a case of applying for his passport…

Of course to add to the interest, the Spanish authorities had managed to lose all of the original documentation that we had submitted with the birth certificate application, so we also had to reapply for both our full birth certificates from the UK, and our marriage certificate from Denmark…! We lost count of the number of times we said “how can this  be so difficult?!”

By this time, we had been here for so long that Hugo had obtained a place in the local kindergarten!!!

So, by the end of January, the passport had arrived and we were finally in possession of all the documentation we needed to be a) legal and b) able to leave Spain. However… the storms and poor weather we’d been experiencing (the ones responsible for the UK’s lack of courgettes, iceberg lettuces etc) continued and worsened, the jobs we needed to do on the boat weren’t getting done, we admitted that we didn’t want to spend any more time in the Mediterranean, and we realised that we’d spent a lot of money without having done any of the intrepid travelling that we had hoped to have done by this point. We had lost our mojo, our vision, and – quite frankly – our enthusiasm. So Jamie went back to London to work for a few months, and I stayed here to tend boat and be mum. However,  we have now rallied, and the time is now finally approaching for our next move!! 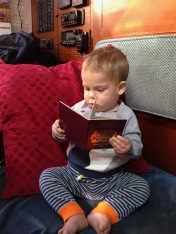 It’s got my photo in it! 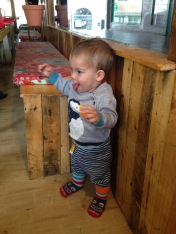 We do actually have a plan – albeit a loose one – and we have also dragged a few friends into the frame to make sure we stick to it! We will be in Almerimar until the end of May (and we shall update you with our plans soon!), but in the meantime we will be posting about some of the exciting (and a few of the not so exciting) things that we’ve been up to during our 10-month sojourn here!

Plenty to look forward to we hope! Thanks for continuing to follow our (currently not very adventurous) adventures!