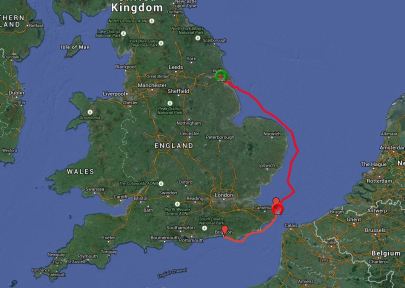 As you’ll have gathered, we bought Rose Rambler of Devon… We sailed her down from Hull to Ramsgate with her previous owners, then round the corner to her new (temporary) home in Brighton with Alan, our ‘skipper for hire’. We discovered what a pig she is to manoeuvre in confined spaces and at low speeds.
We had a lesson in manoeuvring in confined spaces from a fellow long-keel owner, and now know that yes, she may be a pig, but at least we know and expect it now. And we don’t ever expect to know in advance what she’s going to do in reverse.
We completed the Club Class sailing/racing weeks with the Brighton Marina Yacht Club and then….. We took her out sailing. By ourselves. And we didn’t die. Or kill anyone. Or damage her. Once we got going, it was actually rather jolly. A big learning curve all round, but we like to think that we *did* learn…
Then the engine stopped working. Luckily, this happened in winter when it was a bit chilly anyway, and I for one didn’t really fancy going out in everything I owned. I am clearly going to be a warm climate sailor. It took a couple of months to get ourselves together to get the engine fixed, during which we also completed several other tasks (by which I mean spent a lot of money): 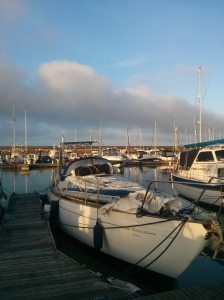 Upcoming jobs:
However, despite the ongoing jobs – there will NEVER be nothing to do on a boat – we are making plenty of progress for the imminent departure in other areas:
So, mid-August is our current plan for leaving the confines of Brighton Marina, and the first semblance of a plan is coming together: work our way down the south coast (using up our ‘free’ nights in Premier Marinas on the way), over to France, across Biscay, round Spain and arrive in Gibraltar for Christmas… After that, we plan to explore the less touristy areas (sorry Benidorm is off the list) of Spain, Southern France and beyond…. We are trying not to plan in detail too far in advance, as you never know what the weather will do, and also we want to be open to a bit of spontaneity if we see somewhere we fancy staying a bit longer or getting out of quicker.